Arco is a beautiful ensemble of four pianos, meticulously sampled in a concert hall with a range of bowed and plucked articulations. Arco is perfect for dramatic swells, shimmering textures and lush melodic lines. Over a year in the making, and the first of its kind, Arco's unique sonic flavours will be a welcome addition to any composer’s toolbox. Runs in Kontakt 5.3 or above. 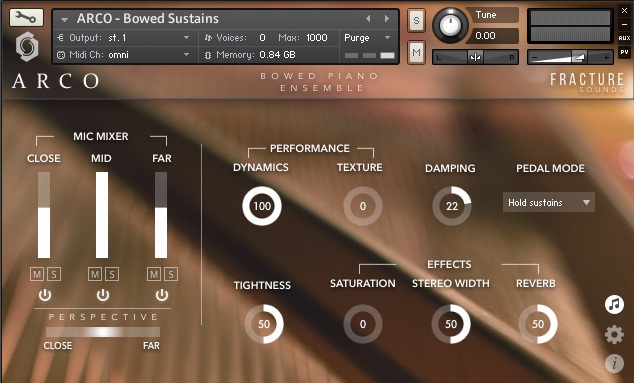 The sound of Arco could be described as a hybrid between a piano and a string ensemble. We took four pianos (two grands and two uprights), put them in a concert hall and performed each note with a range of techniques. After weeks of planning and experimenting, we settled on using nylon fishing line, coated in two types of rosin – bass rosin for the lower range and cello rosin for the upper range.

In addition to bowed articulations, the library also contains ensemble plucks, a specially scripted plucked tremolo, and a range of atonal and aleatoric FX and glissandi.

Developed with the modern film, TV and game composer in mind, Arco is extremely playable out-of-the-box, and features a clean, accessible user interface for controlling the performance.

We spent 3 days in a modern concert hall recording studio, recording the ensemble with 20 top-shelf microphones (including Neumann, DPA, Royer, Coles and Schoeps), through a pristine signal path (D.A.V. pre-amps, RME converters). The hall we chose features a deliciously rich, thick, yet fairly short reverb tail, perfect for creating a sense of distance while being dry enough to add your own reverb to taste. The three included microphone mixes make it easy to dial in the perfect sound for your music, and the unique ‘perspective’ control gives you a single slider to easily shift between a close or distant mix.

Separate ribbon mic patches are also included, which give a thicker, warmer character to the sound.